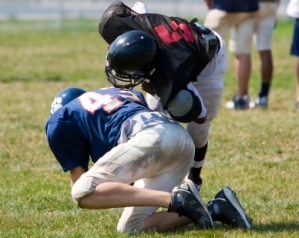 Immediately reporting concussion symptoms is in a team’s best interests because it gives the athlete the best chance to return to sport activity in the shortest amount of time and helps to ensure that the team’s overall performance is not compromised by the concussed athlete, says a new study in the Journal of Athletic Training. (1)

Analyzing medical charts of group of 97 NCAA Division 1 athletes who suffered diagnosed concussions during the  7-year period from 2008 to 2015, researchers at the University of Florida and and the Medical College of Wisconsin found that delayed reporting of concussion symptoms was associated with a recovery almost 5 days longer than for athletes who immediately reported symptoms, and that athletes who delayed reporting were approximately 2.2 times more likely to experience a prolonged recovery of 8 or more days.

Of athletes immediately removed from play, 73% recovered in one week and  all recovered by two weeks.  Of the concussed athletes who delayed removal from play only 40% recovered by one week, and at two weeks 20% were still symptomatic.

The authors viewed the 5-day extended recovery period as representing a “clinically significant time period with potentially substantial consequences for both academic and athletic participation,” and said their study was the first to provide “clinically meaningful evidence that remaining in play after a concussion carries significant negative consequences in terms of prolonged recovery time.”

Best for team and athlete

Perhaps more important than the study’s implications for clinical practice, however, are the potential use of its findings in combating the chronic under-reporting of concussions by athletes.

Among the reasons athletes give for not immediately reporting concussion symptoms are a belief that they can safely delay disclosure until their removal is less likely to affect game or practice play, or until the symptoms worsen and can no longer be ignored, or that they do not want to disappoint coaches, teammates, parents, and fans by coming out of the game.

“From a pragmatic perspective, we believe [our findings show] that immediately reporting concussion symptoms is [actually] in the best interests of teammates and coaches,” says lead author, Breton Asken, because “it is likely more beneficial for the team if the athlete misses the shortest amount of time possible after sustaining a [concussion]” and “overall performance is not compromised by the concussion.”

“If athletes know that they may be worsening their recoveries by failing to report concussions, they may have incentive to properly disclose suspected injuries in a timely manner,” Asken suggests.

“We need to find a way to get education to kids that is actually meaningful to them,” says Beth Pieroth, a neuropsychologist at North Shore Medical Center in Chicago, and that results in behavior change.”

One way, Pieroth suggests to do that is to make sure athletes appreciate that, after concussion, they are at higher risk of suffering orthopedic injuries. (2)  “If you are slower off the ball, slower to the puck, you are more likely to get hurt; maybe get your knee blown out, maybe get your shoulder dislocated.  So it’s not just about getting another concussion, it’s making sure you’re healthy, so you can go back to play fully,” Pieroth said.

“We also know that you just don’t play as well. So one of the things we try to tell kids is, you say you are staying in the game because you don’t want to let your teammates down, but you are letting your teammates down if you don’t play well.  So come out of the game,” says Pieroth, “so we can make sure you are okay. Let’s make sure you don’t go back to play until you are recovered, and that’s really [the best way] to support your team.”