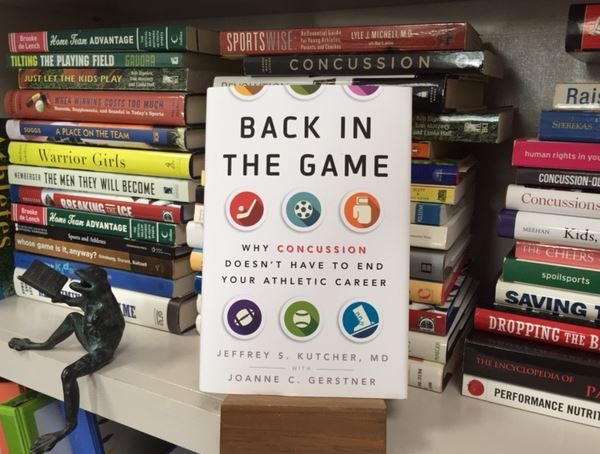 “Back in the Game”: A Concussion Book That Stands Out In Crowded Field

While the pile of concussion books in my office continues to grow taller, seemingly with every passing day, one that will stay at the top of the very short pile of my favorites is Back in the Game: Why Concussion Doesn’t Have To End Your Athletic Career (Oxford University Press, New York 2016) by sports neurologist Jeffrey Kutcher, M.D., and award-winning sports journalist Joanne Gerstner.

The collaboration of Ms. Gerstner, a first-rate, professional journalist with a background in reporting on sports science, and Dr. Kutcher, one of the nation’s top concussion researchers and clinicians who lives, breathes and eats concussions every day for a living as the National Director of The Sports Neurology Clinic at The CORE Institute™ in Brighton, Michigan, and for whom I and my staff at MomsTEAM have enormous respect, is a match made in publishing heaven.

A straightforward, elegantly written, concise, and well-organized 215 pages, Back in the Game stands out in a crowded field, not just as a primer on concussions for a parent, coach, or athlete, but for its incisive and often pointed criticism of the way our national conversation about concussions and the long-term effects of playing contact and collision sports has been shaped – some would say warped – by a media that too often eschews fact-based reporting in favor of sensationalism and fear-mongering.

The title of the book alone tells you that Gerstner and Kutcher are not out to scare the reader, not out to make sensational, scientifically unproven, claims about the long-term effects of concussions, but that they prefer instead, like I, to live in the “land of the real.”  Eschewing the extremes occupied by the loudest voices in the national concussion and youth sport conversation, the ones who either deny there is a serious issue that needs to be addressed (who they characterize as the “just a knock to the head” crowd) or have become so convinced that contact sports inevitably result in lifelong disability that they are so fundamentally unsafe that they should be abolished, they opt instead for the common sense middle ground – a place where MomsTEAM and I have been all along –  a perhaps mythical place where it is possible to have a “more thoughtful, science-based” dialog about the role of sports in our kids’ lives. (It’s been a pretty lonely place to be, to be honest; I’m glad to have some company!)

The book accomplishes what it sets out to do.  I know, because, when I was done reading, it was if I had just had a long, thought-provoking conversation with Kutcher and Gerstner – perhaps while sitting in the bleachers watching a high school football game on a Friday night – during which I not only learned the essentials about the identification, treatment, and management of concussions, that a concussion doesn’t have to end your child’s athletic career; but, just as importantly, that you simply can’t trust a lot of what you read or hear about head injuries on television, radio, or on Twitter.

The book begins, appropriately, with a chapter debunking common sports concussion myths and fears, mostly perpetuated by the media.  Kutcher correctly identifies the tradition of contact sports and the peer-enforced ethic to be tough as reasons why so many athletes, even knowing the dangers from continuing to play with concussion symptoms, don’t tell anyone about their symptoms.  He  bemoans a culture in which “leaving the game or admitting they were hurt was not an option” and in which an athlete’s teammates, winning, or their own ego are prioritized above their health (a culture which, I should point out, our new 5-step SmartTeams™ concussion education program is designed to change).

A helpful explanation of what a concussion is and isn’t is followed by a section in which Kutcher clears up the confusion in the minds of many between concussion (a term which, he says, should only be used to describe the injury or the immediate effect of the injury resulting from concussion forces transmitted to the head), post-concussion syndrome (symptoms patients experience for several months at a time when they are likely no longer concussed), and the problems former athletes, especially in contact sports, experience with their thinking, mood, and memory later in life, when they are no longer concussed, and the serious neurological condition they have as a result of playing sports is not itself a concussion and likely more the result of how often they were hit than their concussion history.