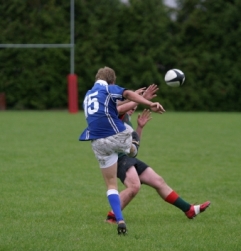 In reflecting on the culture of sport and the reasons an athlete may or may not report a concussion, I think about a 15-year-old-male elite rugby player who came to my office with his parents.

Two months earlier, he had been tackled during a game and suffered a blow to his head. Following the tackle, he had an immediate headache, but continued to play. After the game, he felt dizzy, tired, and “not right.”  But he didn’t report his symptoms to his coaches, teammates or parents.  He then returned to school with continued symptoms, which he did not report to his teachers.

After a month of continued symptoms, he finally told his parents about his injury. His parents made an appointment for him to see the family physician. The physician recommended some school restrictions, and to rest from all physical activity until cleared by a specialist. A referral was made to Concussion North, our interdisciplinary sports concussion clinic, for an opinion on return-to-play.

During our first consultation, the athlete made it clear that he was looking to be cleared to play in a game scheduled for the following day, this despite admitting that he was still experiencing symptoms of concussion during the visit.  I had a lengthy conversation with both the patient and his father about concussions and explained that return to play required assessments by all members of my team. I also explained that, once the assessments were complete, we would initiate a step-wise progression for various aspects of his care, including both his return to physical activities and, more importantly, return to learn.

Following our discussion, the patient’s father stated that his son would be upset about not being able to immediately return to rugby, despite being off all activities for 2 months without a proper assessment. I was slightly puzzled by the father’s response, but the case emphasizes the concern about not reporting concussion symptoms and the need for continued education about the importance of assessing patients for both return to play and return to school.

It also raised in my mind the following questions:

As a physician, I sometimes look back on my experiences as a NCAA athlete in both tennis and soccer, and ask myself, would I have been honest about my symptoms, recognizing it could mean having to miss the sports I enjoyed so much?

It’s a difficult question to answer, but it helps me to recognize the importance of reaching out to our current athletes to both educate and attempt to understand the barriers to reporting concussions and seeking care.

Research we have recently completed at my clinic, Concussion North, has helped us to identify clinical aspects of a concussion which predict a potential prolonged recovery. It also demonstrated that delayed presentation to a multi-disciplinary clinic is linked to a prolonged recovery (six months or longer).  These are just two of many reasons athletes must report their symptoms immediately, as it will ensure they are safe and ready for competition and not suffering from concussions for prolonged periods.

I am extremely excited, as a member of SmartTeams™ Board of Advisors and of its Concussion Working Group, to reach out to the people affected by concussions and encourage them to seek out the care required to safely return them to the things they love: school, play and life.