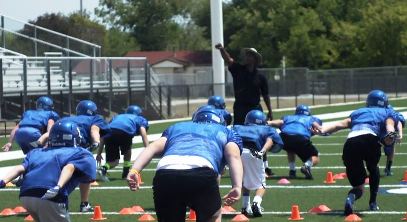 Repetitive Head Impacts: A Major Concern At All Levels of Sports

A growing body of research suggests that  brain trauma among football players (and athletes in other sports such as soccer and ice hockey) is less the result of violent collisions that cause concussions as the cumulative effect of repetitive head impacts (RHI). The discovery has lead to increased calls by experts to take steps at all levels of sports, from professional down to the youth level, to limit exposure to such repetitive trauma, while a shrinking minority continue to urge a more cautious approach until more is known.

Although scientists have long suspected that RHI caused brain damage, especially in boxers, a 2010 study of high school football players by researchers at Purdue University (1,13) was the first to identify a completely unexpected and previously unknown category of players who, though they displayed no clinically-observable signs of concussion, were found to have measurable impairment of neurocognitive function (primarily visual working memory) on computerized neurocognitive tests, as well as altered activation in neurophysiologic function on sophisticated brain imaging tests (fMRI).

Indeed, researchers found, the players with the most impaired visual memory skills were not those in who had been diagnosed with concussions but were in the group which, in the preceding week, had experienced a large number of RHI – around 150 hits – mostly in the 40 to 80 g range of linear acceleration.

Publication of the Purdue study sent shock-waves reverberating through the football world, with the findings cited by concussion experts calling on youth sports organizations to take more aggressive action to minimize exposure to RHI, including sub-concussive blows, by changing the way contact and collision sports are played and practiced, and reducing the amount of brain trauma a child incurs by limiting the number of hits they sustain in a sports season, over the course of a year, and during a career.

Governing bodies at all levels of football responded with rule changes:

Some states have gone further.  The Kansas State High School Activities Association (KSHSAA), for instance,  was one of many state associations to make pro-actively make changes to its football rules that went beyond the recommendations of the NFHS Task Force. For example, players in Kansas are no longer be able to participate in “Live Action” the day after a game. And, effective with the 2016 season, they will not be allowed to participate in games on consecutive days, a change was made to address the issue of student-athletes playing a varsity game followed by a junior varsity game the next day.