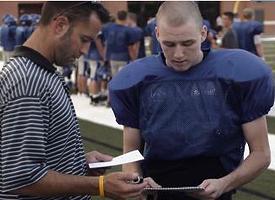 A new research paper has raised concerns about the accuracy of a vision test as a rapid sideline screen for concussion in high school athletes. (1)

The research, presented as a poster at the Annual Meeting of the American College of Sports Medicine in Boston in June 2016, revealed a “mixed picture” at best for the use of the King Devick test (“KD”), a rapid, sideline screening assessment tool for concussion diagnosis and management consisting of a timed test measuring visual impairment associated with concussions.  According to the previous medical literature for the KD test, a concussion should be suspected if there is any slowing in an athlete’s test time, even by one second, from baseline.

Researchers at Ohio State and Nationwide Children’s Hospital found that one quarter of the high school athletes tested who had not suffered a concussion had slower times from their baselines on re-testing.

That KD demonstrated “relatively poor specificity” in that it was only able to correctly identify 75% of the athletes who did not have concussions, said lead author, Dr. James MacDonald, a professor of pediatrics and family medicine at Ohio State and sports medicine physician at Nationwide Children’s,* not only put his findings at odds with a 2015 meta-analysis (2) finding a 90% specificity in testing of adults, but raised concerns about the use of KD as a sideline screen in high school athletes, because the slower test results might lead sideline personnel to bar some athletes from further participation who might otherwise have been cleared to return based on the results of other sideline concussion assessments.

MacDonald and his colleagues concluded that “further work needs to be done … with [a high school] population prior to KD becoming routine standard of care for management of [sports-related concussions] in high school athletes.”

MacDonald’s conclusion was echoed in a new study published in Athletic Training and Sports Health Care (3) at the same time he was presenting his poster to the ACSM which reported significant practice effects in administration of the KD test, a significant effect of age on time to completion of baselines, and a large difference in median times between male and female test subjects, all of which lead the authors  to characterize validation of the King-Devick test for clinical use with young patients who potentially have concussion as being in its “early stages.”

The percentage of false positives identified in MacDonald’s study come as a number of clinicians have recently expressed concern about the aggressive, and in their view, inappropriate marketing of KD for use by parents, coaches, and other individuals without clinical training in the identification and diagnosis of concussions.**

MacDonald characterized the increasingly intense marketing of the test for use by parents and coaches as “outstripping the independent evidence that exists to date.” He also noted that the research studies – almost all of which were by the same authors, one a member of KD’s management team – bolstering the company claims regarding KD’s accuracy would need to be validated with quality research from independent sources.   Even before conducting his own research, which identified a potentially serious flaw in the test, MacDonald found the claims of high specificity and sensitivity “implausible.”

Moreover, MacDonald pointed to the difficulty even medical professionals have in obtaining accurate KD baselines, especially for athletes with pre-existing learning issues such as ADHD or dyslexia.  Parents and coaches were, in his view, simply unqualified to make the kind of clinical judgment required.

“I have a big issue in how [KD] is marketed,” said Tracey Covassin,* head of the athletic training department at Michigan State University, who also expressed concerns about the test’s sensitivity and specificity (the measure of the test to correctly identify athletes with concussion), and how it is administered.

“According to KD website, you administer the KD two times at baseline and take the fastest time. However if you make an error, you get to try again until you are error free. So some of our athletes we baseline take three or four times to get a good baseline. But in post-concussion testing they get one chance. If you have an error they label you concussed; if you are slower you are concussed. So in reality a kid does the baseline will never have an ‘official’ error, but actually they may have had two errors. Now he does a post test and if he has one error he is concussed, but his official baseline test says he has to do it with no errors.”

Likewise critical of KD’s marketing for administration by laypeople was Andrew Blecher,* a primary care sports medicine physician and director of the SCORE Concussion Program at the Southern California Orthopedic Institute.  Blecher characterized KD as “well intentioned in design” but “horribly hijacked by its marketing.”

No matter how simple and reliable the test may be, Blecher was firmly against allowing coaches or parents to use a test to make a return to play decision. “If the coach or parent has enough concern that they feel they need to administer the test, then the kid should be held out anyway until they are evaluated by a healthcare professional. The healthcare professional can use the KD test as a tool, but giving the tool to untrained individuals is dangerous” because “the first time a parent does a KD test on a kid and the kid passes the test and goes back to play and gets hit again and ends up with Second Impact Syndrome, there is going to be a lawsuit.”

Tamara Valovich Mcleod,* director of the athletic training program at A.T. Still University in Tempe, Arizona, and a co-author of the June 2016 study reporting practice effect concerns (3),  viewed KD as a good tool when administered by healthcare providers as part, but not instead, of a comprehensive battery of concussion assessments tools.  Like the others, McLeod expressed concern with KD’s marketing as a removal-from-play tool for use by parents and coaches.

“With most state laws, suspicion of concussion is enough to [warrant] remove from play, which results in that player being held out for that day and until cleared by an appropriate healthcare provider. On the sideline, if someone administers the [KD] test to an athlete, there is a suspicion of concussion already, so regardless of the test score, the athlete [should be] done until cleared. Therefore is it really needed, as the suspicion is already there?”

Administration on the sideline by a parent or coach could also lead, said McLeod, to some “sticky situations, with some of the instructions indicating that taking longer than 5 seconds from baseline may indicate a concussion. So what if an athlete is faster, or not quite 5 seconds slower? In those situations there is a chance that the parent or coach could think there is not a concussion and allow the athlete to return, [hence] violating state law.”

Dr. Rosemarie Moser,* Director of the Sports Concussion Center of New Jersey and a member of the Centers for Disease Control and Prevention’s panel developing guidelines for the identification and management of pediatric mild traumatic brain injuries, also had concerns about KD being “promoted as being able to be administered by untrained, lay people.”

Noting, like Dr. MacDonald, that 11 of the 15 studies reviewed in the KD meta-analysis (2) were authored or co-authored by the same two researchers, Moser agreed that “greater independent research representation and more research was needed before KD could be established as a “best practice” in the identification and management of concussion.  Like the other clinicians interviewed, she had experienced difficulties in administration and variability in performance for the KD in using the test in her clinic.

Expressing the same concerns about test administration was Johna Register-Mihalik,* a concussion researcher at the University of North Carolina, who was also critical of the marketing outside of medical professionals because it gave a “false sense for how accurate (not to mention issues with administration) the tool may be for many parents.”  Like the others, Register-Mihalik said KD “may provide an additional domain of assessment, but should certainly not be used in isolation as a screening tool by non-medical professionals, or as the primary measure of concussion. We need larger scale studies to continue to contribute to this body of literature before we can fully understand its utility,” she concluded.

* Member of the SmartTeam concussion group.

** Editor’s note: In its PBS documentary, The Smartest Team: Making High School Football Safer, SmartTeams featured the KD test as a concussion screening tool for use on the sports sideline along with other concussion assessment tools, but only for use by a certified athletic trainer, not by a parent, coach, or other individual without clinical training in the identification and diagnosis of concussions.