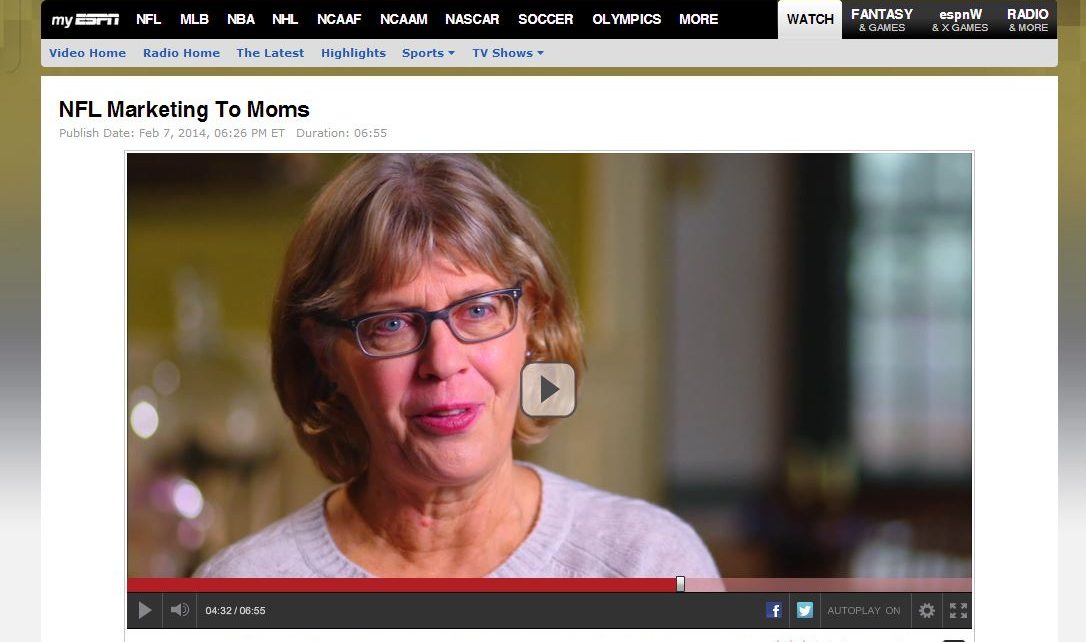 My Appearance on ESPN’s “Outside the Lines” Feature On NFL’s Marketing To Moms: The Rest Of The Story

On Sunday morning, I appeared as a guest on a ESPN’s weekly program “Outside The Lines” on a segment titled “NFL: Marketing To Moms.”

Besides my interview, the show featured reporter Tom Farrey talking to a group of youth football moms in Eden Prairie, Minnesota, which, despite a rich football tradition (9 state championships since 1996, including the last three), has seen youth football registrations drop by about one third since 2008; an excellent panel discussion with the head of Eden Prairie’s youth football program, journalist Patrick Hruby (a consistent critic of football safety), and Maria Bailey, an expert on marketing to moms; and an interview with Tom Cove, head of the Sports & Fitness Industry Association, the trade group for sporting goods manufacturers, whose annual survey reveals that participation in football at all levels has declined five years in a row and 14% since 2007.

Good thing I decided to beat the traffic this morning to get to the office before the sun even came up, because it took an hour just to scan and sort all the email I received in less than 24 hours after appearing on the show. Some were to offer congratulations; some wanted to introduce themselves or their products, but the lion’s share were to ask questions.

But before I provide answers to the most frequently asked questions I have been asked over the past 24 hours, I first want to extend kudos to ESPN, studio host Bob Ley, and Tom Farrey for producing such a highly informative show, one that was objective, and thought provoking, and which heard from all sides of the issue (well, almost: NFL Commissioner Roger Goodell declined ESPN’s request for an interview) in examining how the NFL has been trying to reach football moms.

I think ESPN got it at least half right in the message it left with viewers, one which I made clear during my interview with Farrey, which was that, while the NFL is spending lots of money, time and energy trying to assure football moms that football is safe and getting safer, they aren’t the ones that moms are, or I submit, should be listening to.

As the group in Eden Prairie made clear to Farrey, football moms don’t want tackling lessons from the NFL; what they want is objective, well-researched information about football safety from an independent source moms can trust.

While it may have come as a surprise to some of the men who were watching yesterday morning, it’s no secret to anyone who lives and breathes youth sports like I do, that, as SFIA’s Cove said, moms “play a huge role in most household decisions,” and are essentially the “gatekeepers of youth football.”

I also agreed with Cove when he warned that “if mothers don’t believe that there are programs that are safe, that are attuned to the needs of the child, football will suffer.”  Like him, I agree that we need to educate them to what good programs there are; coaches that have been trained, techniques that have been taught.”

But what OTL only briefly touched upon in passing was that there are, right now, places on the Internet where football moms can get the information that they say they want and need in order to decide for themselves whether football is right for their child, and, if so, at what age, and for how long.

I recognize, of course, that it was hard for ESPN to not only pack into less than 20 minutes of air time a discussion of the problem of football safety that has so many moms concerned but also the solutions, but this is what had so many writing to me over the past 24 hours, so here are my answers to those FAQs (or, as the late radio news commentator, Paul Harvey used to say, “the rest of the story”) :

Question: Why didn’t OTL mention MomsTEAM’s documentary, The Smartest Team: Making Football Safer, which began airing on PBS stations around the country in the fall of 2013 and is still showing on some stations? Wouldn’t that have been a way to address Tom Cove’s concern that football is going to be in trouble if moms aren’t educated about ways the game can be and is being safer?

Answer: I was thrilled to see ESPN give my book, Home Team Advantage: The Critical Role of Mothers (Harper Collins) and our website MomsTEAM.com, some good attention, yet my one hope was that ESPN would shine more of a spotlight on the work we have been doing over the past 14 years to educate parents about youth football safety and provide them the objective, unbiased information they say they want.

I am absolutely convinced that if more moms knew about MomsTEAM and The Smartest Team, a lot fewer of them (44% in one recent poll) would be saying they want to see football made safer, because more would know that it is being made safer, that the sport is a lot safer than it was 14 years ago, not only because we are light years ahead of where we were in 2000, when we first started reporting about concussions in youth sports, in terms of concussion identification and management and ways to minimize risk of injury, but that there are more and football programs around the country adopting comprehensive head injury risk management programs similar to the Six Pillars™ program featured in The Smartest Team, which are making the sport safer.

Question: What did you mean by your opening statement in OTL that you didn’t know if the NFL is telling them it is safe or not?

Answer:  First, let me say that what was selected to run during the show was just part of a much longer discussion I was having during my interview with Farrey, which came in response to a question about the clinics the NFL was hosting for football moms around the country.  I said I didn’t know what the NFL was telling the moms because I had not been invited to attend.

Question: Where was the book signing held and will you come to talk to our group?

Answer: That clip was shot in Princeton, New Jersey after a screening of The Smartest Team. I often speak with parents groups, and to give keynote addresses at national conferences, put on workshops and consult with school boards, but, since the documentary came out, I have focused on doing screenings with a Q/A panel after with the other experts who are featured in the film.

Question: You said during the show that your “fear is that [the NFL is] talking about the wrong topics. If they’re spending a lot of time in teaching moms how to tackle, well, they’re wasting their time. … We really need to talk about the right issues, and, until you’re in the trenches, you don’t know what the problems are.” What are the issues you want the NFL to address? You say that the NFL is “sending the wrong message. What is the correct message?

Answer: In the fall of 2012, I traveled from Boston to New York to meet with some of the top marketing and communications folks at the NFL’s headquarters on Park Avenue during which I suggested to them that, in my view, the best way to reach the moms was to support MomsTEAM and our experts, as the unbiased, objective and trusted source of football safety information and the acknowledged “pioneer” in concussion safety education, to reach more moms. For reasons known only to the NFL, the league declined to work with us, deciding instead to try to reach moms directly. My honest assessment of that effort, as I told Tom Farrey, is that it isn’t working.

Question: When Farrey asked you, “Doesn’t the NFL deserve some credit for improving the game”? your answer was “absolutely.” Yet, later, you say that because “the NFL has been built on violence and collision,” trying to be experts in youth sports “doesn’t square with me.” How so?

Answer: It doesn’t square because moms are too smart and too safety-conscious to get their advice about the safety of football from a league that clearly has a conflict of interest when it comes to providing objective information about the safety of the game. It is hard to expect a business that generates billions of dollars in revenue from a game which involves a serious degree of risk to its participants to provide the parents of America the straight skinny about how safe the sport actually is.

Question: Tom Cove expressed the view that if mothers don’t believe that there are programs that are safe, that are attuned to the needs of the child, football will suffer. What is MomsTEAM doing to show moms that there are programs which are, if not risk free, as safe that they reasonably can be, that employ best practices, that are attuned to the needs of children for the safest possible football experience?

Answer: One way, of course, is by continuing to use the MomsTEAM.com platform to provide youth sports parents, whether they be in football or other sports, with unbiased, impeccably researched health and safety information and advice.

A second is by producing documentaries such as The Smartest Team to get the message out to the largest possible audience, to show what can happen when a sports program shows its commitment to improving safety by adopting best safety practices.

And the third way is by forming a new non-profit, MomsTEAM Institute, which will be working collaboratively with the nation’s leading sports safety experts, researchers, doctors, athletic trainers, scientists, government and non-governmental agencies and non-profits, youth sports organizations, and parents to identify best health and safety practices, and awarding programs and teams that are working to or have already implemented them such practices designation as “Smart Teams.”

We are inviting all those with a stake in reversing the decline in participation in sports by the nation’s youth, not just in football but other sports, who support our ongoing mission of making youth sports safer, to join us in that effort. Through your contributions of time, talent, and treasure, we believe that the Institute can achieve its ambitious goals, not only to be MomsTEAM 2.0, but through its Smart Team program, achieve nothing less than a paradigm shift in youth sports by making it, once again, a safe playground for children, not an arena where, all too often, adults more interested in winning put the safety and well-being of our children at unnecessary risk. Originally posted in a slightly altered form on MomsTEAM.com on February 10, 2014