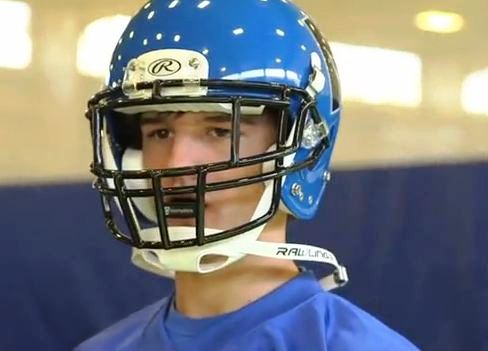 Analyzing data on 4580 concussions sustained by high school players over 9 seasons, the study reported that athletes with helmets which did not fit properly had greater rates of drowsiness, hyperexcitability, and sensitivity to noise, averaged more concussion symptoms, and were more likely to experience symptoms for longer than a week than concussed athletes with properly fitted helmets.

Researchers, led by Dustin Greenhill, a physician at Temple University Hospital, also found that athletes who sustained a concussion while wearing helmets with an air bladder – which represented 80% of the total – had significantly greater rates of sensitivity to light and to noise, while those wearing helmets with a gel or foam liner had significantly greater rates of loss of consciousness and drowsiness.

The data also suggested that players suffered more severe concussions after a NFHS rule change went into effect in 2012 mandating that a player whose helmet became completely dislodged during play (most likely as a result of a potentially major impact) be removed from the game for 1 play to adjust the helmet, and the frequency with which symptoms lasted more than 1 week increased, findings Greenhill found “concerning.”

Greenhill and colleagues said one possible explanation for the more severe concussions in the group with poorly fitted helmets was that the cervical muscles play an important role in absorbing impact forces, as the helmet and head function as a single unit, so that if the helmet is loose, it acts as a separate unit so that the cervical muscles may not be able to dampen the forces, especially the rotational forces, which are then transmitted from the helmet to the brain.  They speculated that a loose helmet might also delay contraction of cervical muscles in response to an impact, since the direction of the force to resist might not be detected until it reached the head.

Maintaining proper helmet fit over the course of a season is challenging because of mismatches between helmet size and the athlete’s head.  Helmet fit can also vary when athletes sweat or play in rainy conditions, dramatically alter their hair styles, such as when they shave their heads, or what they wear under their helmet.  Air bladder systems may leak, resulting in insufficient inflation.

Current NFHS rules only require coaches to verify before each game that all athletes are wearing helmets meeting NOCSAE standards and that the NOCSAE warning label on the exterior of the helmet is intact, but do not charge any specific individual with responsibility for ensuring proper helmet fit prior to participation, and warning label omits mention of poor helmet fit as a risk factor for head and neck injuries.

Instead of leaving it up to athletes to recheck helmet fit, inflate a loose air bladder during the season, or bring problems with helmet fit to the attention of team officials, the study recommends that team physicians, athletic directors, coaches, athletes, and ATs be aware of the potentially deleterious effect of improperly fitted helmet, and that high school athletic associations and high schools ensure proper adult oversight of football helmet fit throughout the season.

Making Sure Football Helmet Fits: A Simple, But Effective Way To Minimize Concussion Risk?
New Rule for 2012: High School Football Players Must Sit Out One Play When Helmet Comes Off