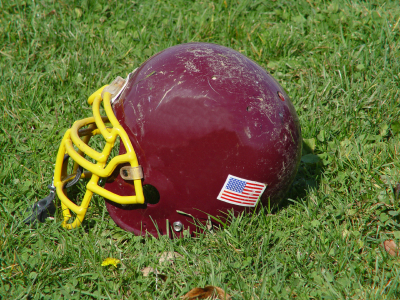 Engaging in a 5-minute helmetless tackling drill twice a week during pre-season football and once a week during the season reduced by almost a third the frequency of impacts to the head over the course of a single season, reports a groundbreaking new study. (1)

The findings, reported in the Journal of Athletic Training, are from the first year of a two-year study in which 50 football players at the University of New Hampshire were assigned to an intervention (25 athletes) or control (25 athletes) group. The intervention group participated in five-minute tackling drills without their helmets and shoulder pads as part of the Helmetless Tackling Training (HuTT) program.

Drills occurred twice per week during preseason practices and once per week over the course of the 16-week season. The control group performed non-contact football skills with no change to their routine. All athletes were provided head-impact patch sensors worn on the skin and new helmets. Both groups were supervised by members of the football coaching staff.

Researchers found that, after just one season, the helmetless-tackling training intervention resulted in a 28% reduction in head-impact frequency per athletic exposure (e.g participation in a game or practice) by the end of the season, while the control group’s head impacts remained the same.  At the end of the season, the intervention group experienced an average 30 percent fewer impacts per exposure than the control group.

High school and college football players can each sustain more than 1,000 impacts in a season, while individual youth players may sustain 100 during that same time frame, according to the study.  With a growing body of research suggesting that repetitive head impacts leads to changes in cognitive function similar to those suffered by players after concussion, that these changes can persist after the season is over, and has been linked to chronic, long-term brain injury, such as chronic traumatic encephalopathy, researchers, officials, and administrators at all levels of football, from youth to the professional level, have sought to mitigate the risk of head-impact injury through better helmet technology, better tackling training, limiting the number of allowable contact practices, and by altering game rules (such as penalizing hits to defenseless receivers).

None, however, directly address the common fundamental cause: impacts to the head. In fact, current efforts directed at improving helmet technology may promote a false sense of security and perpetuate – rather than eliminate – the use of the head as the point of contact during play, experts say.

“The notion that removing the football helmet for discrete and regular periods during practice to reduce head-impact frequency is counterintuitive to the sport,” writes Erik E. Swartz, PhD, ATC, FNATA, lead author of the study and professor and chair of the Department of Kinesiology at the University of New Hampshire.

“These findings elucidate the risk-compensation phenomenon and may help explain the behavior of spearing and the rise in catastrophic neck and head injuries that followed [introduction of football helmets with hard polycarbonate shells in the 1950’s and 60’s],”  the study states.. “A football helmet is designed to protect players from traumatic head injury, but it also enables them to initiate and sustain impacts because of the protection it affords. While improving protective equipment in and of itself will not resolve the risk of concussion and spine injury in football, the solution may be found in behavior modification.”

“The extent to which this intervention may yield similar outcomes in younger players with less experience is still unknown,” says Swartz. and modifications may be required to realize a positive effect.  To that end, he noted that researchers were currently in the first year of a study testing the helmetless-tackling training program at four high schools in New Hampshire,

“Should future research replicate our findings, the eventual adoption of helmetless-tackling training [may] improve public health and decrease the associated economic burden by reducing football-related head and neck injuries and the risk of long-term neurologic [injury],” Swartz said, which is “of vital importance for younger, more vulnerable populations.”