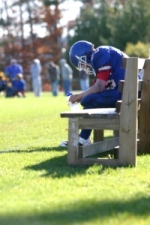 Chronic under-reporting of concussions among high school football players persists, despite increased awareness, education and legislation, say researchers in a presentation made at the October 2015 American Academy of Pediatrics National Conference and Exhibition.

A oft-cited 2004 study found that more than 50% of concussions sustained by high school football players go unreported. (Many believe, and some studies support the view, that the actual percentage is far higher) Given increased concussion education and awareness – much of it media-driven – in recent years and the passage since 2009 of legislation in all 50 states requiring some minimal level of concussion education of parents, athletes, and coaches, researchers sought to determine whether the percentage of concussions sustained by high school football players which go unreported has changed over the past 10 years.

The short answer: not much.

To allow an apples to apples comparison, they used a questionnaire based on that used by the authors of the 2004 study, including questions about concussion history, concussion injuries sustained during the 2014 season, frequency of reporting concussions, age, grade point average, position, an athlete’s perceived importance to the team, intentions to play sport beyond high school, and position at time of injury.

Here are findings they gleaned from a preliminary review of that data:

Disappointing but not surprising results

The findings of the study, while disappointing, are in line with the results of other recent studies reporting little if any change in concussion reporting attitudes and behaviors of college and high school players, and documenting continued resistance of athletes to reporting, despite increased education, knowledge of symptoms, and recognition of the serious nature of head injuries and the risks posed by continuing to play with such symptoms.

A 2013 study, for instance, reported that the top two reasons high school athletes did not report concussion symptoms were, first, that they did not think the injury was serious enough to report (70.2%)(the fact is, of course, all concussions, as injuries to the brain, are ‘serious’), and, second, they did not want to be removed from the game (36.5%)(research show that continuing to play with concussion symptoms increases the risk of a longer recovery and long-term health problems), percentages higher, but not substantially, than the 56.9% and 47.7% of athletes in the current study who attributed their non-reporting to those two same reasons.

The fact that the percentage of athletes who were first-stringers reporting concussion symptoms was substantially lower than the reporting percentage of second-stringers (49.3% versus 73.3% lower reporting rate for first-string players versus non-starters was “a notable finding,” said co-author Jim MacDonald, a pediatric sports medicine physician at Nationawide Chiildren’s Hospital, in an email.

That data suggests that starters are less likely to report because they fear that, if they do, they will put their starting positions at risk, or that they will be seen as letting their coach, teammates, and parents down (lletting their teammates down was the third-most cited reason for non-reporting in a 2013 study of reporting behavior, picked by nearly a third of athletes).

The authors concluded that, because athletic trainers and coaches play such an integral role in the reporting of concussions in this population, awareness and education initiatives may best be focused on educating them to identify additional risk factors for athletes susceptible for concussion and non-reporting.

But given the continued unwillingness of athletes to honestly self-report experiencing concussion symptoms despite increased concussion knowledge, will more education of coaches and athletic trainers lead to increased self-reporting?

Probably not, say an increasing number of concussion experts, who recognize that knowledge alone does not necessarily lead to a change in attitudes towards self-reporting, much less increase reporting, because, while individuals may understand and believe that concussion is a serious injury and even a medical concern, they may still not report the injury if they also believe that their peers or coaches will take issue with their reporting their injury or that they may lose substantial playing time,

An increasing number of concussion experts, advocacy groups, and national governing bodies have thus begun to focus on new and innovative ways to improve the chances of identifying athletes on the sports sideline suspected of concussion so they can be removed from game or practice action and referred to a health care professional for a clinical diagnosis.

Many are calling for nothing less than a paradigm shift in the culture of sports, from one of resistance to one of safety, directing their efforts to finding ways to create an environment in sports which rewards instead of penalizing concussion-care seeking behaviors, such as reporting a teammate suspected of having sustained a concussion or removing one’s self from play when experiencing concussive symptoms.

“Education alone may not be enough,” says MacDonald. “Changing the culture of football to one where coaches take the lead to actively encourage reporting may be an approach [we need to take] to overcome [the culture of resistance].”

In addition to trying to increase self-reporting rates by changing the culture, some are also looking at a technological end-run to the under-reporting problem in which sideline personnel rely less on the athlete to honestly report and more identifying athletes suspected of concussion through other means, such as the use of impact sensors.

And some, like MomsTEAM, believe the best way forward is to take an ‘all the above’ approach.

The reality is, though, that changing the culture will likely only occur incrementally over a long period of time, and take perhaps as long as a generation, and that technological, scientific, and cost hurdles stand in the way of widespread use of impact sensors.

“Whatever approach we take from here,” says MacDonald, “our results suggest that all the work on education and awareness to date seems not to have had a significant effect on getting players to report concerning symptoms, and that much work remains to be done.”