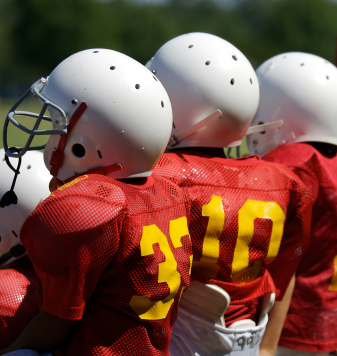 3. What support in the case law is there for imposing tort liability on a national sports organization, such as Pop Warner, the United States Soccer Federation, or the National Federation of State High School Associations, for a sports injury as being proximately caused either by the organization’s failure to enact policies consistent with best safety practices or failure to enforce such policies? (In other words, does an organization owe a duty of care to players or, if it does not, does it assume such duty by enacting policies which it then fails to enforce, resulting in injury?

I’m not sure that you’re going to find a lot of case law that says that a governing body is going to be liable just because it didn’t enact a specific safety rule. Even the high profile lawsuits that asked governing bodies to pass specific legislation usually sought the legislation as a remedy for negligence as opposed to arguing that the lack of legislation was negligence in itself.

I think the best way to describe the law on this is as follows: (a) a player assumes the inherent risks of a game. (b) a sports governing body can’t take steps to make the inherent risks worse. (c) concussions are clearly an inherent risk of the game. I think everybody would agree with this.

Where people disagree is on factual matters and on remedies. The facts lead to findings of negligence. There are probably some attorneys (most notably Joe Siprut, the attorney who sued the IHSA) who would argue that not writing specific laws is tantamount to negligence, but I think most attorneys have argued that negligence is found through poor coach training, poor concussion return-to-play practices, and I think a number of people would contend that some larger governing bodies (like the NFL or NCAA) may have rigged the game by having knowledge of risks that they did not disclose to large classes of victims (in all fairness, though, nobody has found the smoking gun yet).

I don’t think that we will see a lot of governing bodies found liable because their rules weren’t good, but we’ll still see some of those organizations settling if the economics support a settlement. Remember, nobody really wants to have a bunch of witnesses testifying about their concussions. A governing body could easily lose the trial and win the appeal, which is an expensive and dangerous way to live. Fortunately, state legislatures are passing so many laws that a governing body may be able to argue that if it is meeting the legislative requirements, it is doing exactly what it is supposed to do.

Governing bodies may escape liability for not writing a specific rule, but there may be a day where they face lawsuits that challenge how they investigate, audit, and enforce their policies. In short, some attorney may ask a governing body whether their failure to properly or effectively enforce a safety rule leads their member schools to not abide by the rule, and whether a large scale practice of coaches not abiding by a concussion rule or football safety rule somehow proximately caused some widescale harm. I don’t know if such a case would fly, but it wouldn’t be fun to defend. My guess is that this type of problem may be better flushed out by a journalist who looks into some coaches as opposed to an attorney. Let’s face it, a newspaper expose on coaches who aren’t trained or are not following rules will move the public far more than a lawsuit,unless the lawsuit is a class action against a very large organization.

I cannot comment on any specific organization named. Generally speaking, I agree with Don and Doug that there is little support for theories of liability against national organizations that can’t possibly be expected to either (1) promulgate policies in a field where there is so little consensus or understanding of the practical problems of enforcement; or (2) to police conformance with all standards of care throughout the continent.

That said, there is ample support for the proposition that national organizations need to be sensitive to the legal environment that necessitates managing the risk of injury by all organizations through placing much emphasis on training techniques and procedures that will minimize risk. In this regard, the most instructive statement I’ve read in the past 7 years (since the “new” concussion data swept the sports world) was that made by Doug Abrams to the extent that “all safety is local. [meaning] Safety rules may be formulated at the national or state levels, but they mean little unless they are actually applied and enforced at the local level.” In other words, Doug has wonderfully focused on the crux of the crisis: On field personnel need to know – and care about — when to remove a player – and when it’s ok for the player to return-to-play. Little else matters in preventing concussion claims.

With regard to the prospective duty of care to players which may be assumed by promulgating policies, there are no easy answers. Organizations that publish playing rules, for example, frequently publish interpretative materials relative to the rules; as well as officiating manuals; and guidelines for coaches and administrators. Obviously, the people delivering athletic programs, especially for a youth population, need to have the knowledge and ability to follow the rules and other guidelines and protocols which are published to carry out the governing organization’s purposes.

Whether an organization can reasonably be held liable for a particular injury during an event connected in any way to the organization is a fact-sensitive inquiry. I believe the weight of authority suggests that liability of a publisher of a rules code or other standard, or even of a national organization that maintains local affiliations that engage coaches and officials and others, is circumscribed by a number of factors. The national governing body and other umbrella type sports organizations rarely can exercise sufficient control over all events to justify liability on a uniform basis. That said, I agree with Don that all organizations need to be ready to defend claims in the future, as plaintiffs’ attorneys seek to expand the concepts of “control” and other theories of both direct negligence and vicarious liability in a variety of contexts.

Douglas E. Abrams is a nationally recognized youth sports expert and professor of law at the University of Missouri, specializing in family law and children and the law.  He is is a longtime contributor to MomsTEAM, and a member of the Institute’s Board of Directors.

Donald C. Collins is an attorney, long-time basketball referee, and Commissioner of Athletics for the California Interscholastic Federation, San Francisco Section. Like Professor Abrams, he is a longtime contributor to MomsTEAM, and a member of the Institute’s Board of Advisors.

Alan Goldberger is a New Jersey attorney whose practice focuses on sports, business and administrative law, sports and athletic risk management, and related litigation) with a background in sports law . He is a member of the Institute’s Board of Advisors.

Originally posted on MomsTEAM.com on February 12, 2016