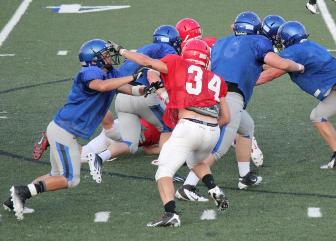 Progression to full-contact and off-season limits

Many states have also enacted rules changes establishing a progression up to full-contact in preseason practices, similar to the heat acclimatization schedules integrated into preseason workouts in recent years. In Illinois for example, the Illinois High School Association (IHSA) limits equipment to helmets only during the first two days of practice, helmets and shoulder pads the next three days, with full pads being allowed on the sixth day of the acclimatization period. Similar progressions have also been adopted in Alabama, Minnesota and Kansas, among others.

Interestingly, a recent study by Purdue researchers provides support for such a progression. it found that cerebrovascular reactivity (CVR), a measure of the ability of blood vessels in the brain to dilate to compensate for increased levels of carbon dioxide in the blood, such as occurring during exercise, was significantly reduced in almost all football athletes during the first six weeks of the contact season, findings which the researchers viewed as demonstrating that the onset of subconcussive blows had “at least a transient effect on the brain, but also suggest[ing] that the brain can adapt to [the contact] with an eventual return to baseline.”

The researchers expressed concern that athletes may be at risk of incurring symptomatic injury during period their brains were trying to adapt to contact at the beginning of the season. Noting that. in most states football teams typically switch from limited contact levels prior to the season to two practices a day, at least one of which includes contact, they expressed concern that, based on their findings, “the brain may not be able to adjust quickly to this change, leaving players at increased risk for injury” at the beginning of the football season. They thus suggested that it might be better for teams to increase the amount of contact more gradually to allow players’ brains to adapt so as to reduce the risk of serious injury.  This is exactly what the new rules in Illinois, Alabama, Minnesota, and Kansas appear to address.

Another key recommendation from the task force was that each member state association review its policies concerning offseason football. In states such as Ohio and Illinois, there were already rules in place to limit contact during the offseason, with teams prevented from participating in full gear or in full-contact practices. Other states that previously had no restrictions in place for offseason football have begun to adhere to the task force’s guidelines as well.

“The information from the NFHS Concussion Summit was very beneficial as we developed these new policies,” said Kevin Merkle, associate director of the Minnesota State High School League (MSHSL). The MSHSL now limits its coaches to 11 contact days during the summer, with full-contact – “Thud” and “Live Action” – being limited to four of those days.

Although the new rules in place for the 2016 football season vary among the states, there has been one constant: the overwhelmingly positive response from coaches. Because of the increased focus on student-athlete safety in recent years, there has been little pushback, said Beau Rugg, assistant commissioner and administrator for football at the Ohio High School Athletic Association (OHSAA).

“Our coaches like the new regulations because they understand they help make football safer for our students,” Rugg said. “Some coaches have even responded saying that the new limitations are keeping their teams fresher for the upcoming season.”

Rugg’s feedback in Ohio has been mirrored in Kansas, according to Lentz.

“Our coaches were part of the process to implement these recommendations, so they completely understand why it was time to make some changes,” Lentz said.

As for future changes, there are still a few important topics to be discussed for upcoming seasons. Continuing to emphasize proper tackling and blocking techniques and adjusting to the new rules for targeting and unnecessary contact are chief among them, Merkle says.

“We are making the rules changes a major focus for our game officials, as it is imperative that they call those penalties to keep the game as safe as possible.”

Other recommendations from the NFHS task force involved implementing coach education programs, as well as having a written Concussion Management Protocol and Emergency Action Plan in each school.

“We continue to emphasize the concussion issue with our schools, not just in football but in all sports,” Merkle said. “It is vital that we do our best to provide them with the most recent information.”

“Looking at the big picture going forward, it is all about continuing to change the football culture across the country and minimizing risk for all who participate in the sport,” said Bob Colgate, NFHS director of sports and sports medicine.

For a pdf of the NFHS’s  “Recommendations and Guidelines for Minimizing Head Impact Exposure and Concussion Risk in Football” position paper, click here.