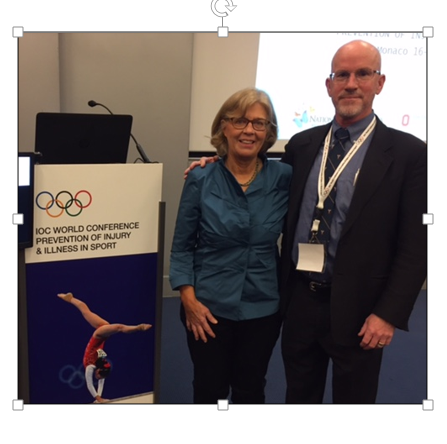 On March 16, 2017, Brooke de Lench, Executive Director of MomsTeam Institute, Inc., and Jim MacDonald, M.D., M.P.H., a member of the MomsTeam Board of Directors, and a sports medicine physician at The Ohio State University and Nationwide Children’s Hospital presented MomsTeam’s Smart Teams Play Safe™ concussion risk reduction program at the International Olympic Committee’s World Conference On Prevention of Injury and Illness in Sport held in Monte Carlo, Monaco from March 16 to 19, 2017.

The 5th IOC World Conference brought together preeminent international sports medicine specialists to collaborate and share their latest findings and knowledge on how best to protect the health of athletes in and out of competition.

De Lench and MacDonald’s hour-long presentation, entitled Reducing the Risk of Concussions in Young Athletes by Implementing Evidence-Based Principles: What Is the Winning Blueprint?, focused on a the Institute’s Six Pillars® concussion risk management program developed as part of its SmartTeams program under a NCAA-Department of Defense Mind Matters Grand Challenge awarded the Institute in 2015.  The program employs low-cost, evidence-based principles of concussion risk reduction which can be implemented by programs regardless of sport, socio-economic setting, or age.

First featured in the Institute’s long-running PBS documentary, The Smartest Team: Making High School Football Safer, the Six Pillars® program, is designed to reduce the risk of concussions and long-term injury from repetitive head impacts while minimizing the effects of concussion in young female and male athletes.  The program is offered free of charge at the Institute’s website, http://concussions.smart-teams.org/ and consists of a comprehensive six-pronged, evidence-based approach to concussion safety consisting of:

In addition, participants at the IOC conference learned about a community-based program the Institute first developed in 2005 called “The Power of The Permit,” which is being utilized by municipalities around the country in adopting concussion risk management programs for all athletes using public fields, rinks, courts, and diamonds, not just those covered by existing state concussion education, removal from and return to play mandates.

MomsTEAM, De Lench, MacDonald, and a world-class panel of expert advisors, have been on the cutting edge of efforts to educate sports stakeholders about concussions injury prevention and treatment for youth and college athletes since 2000 and are considered “pioneers” in concussion education and the implementation of successful concussion risk reduction programs for young athletes across the United States.

Links to the program

Article: Power of the Permit: Improving Youth Sports Safety One Municipality at a Time http://www.huffingtonpost.com/brooke-de-lench/power-of-the-permit-impro_b_7803230.html