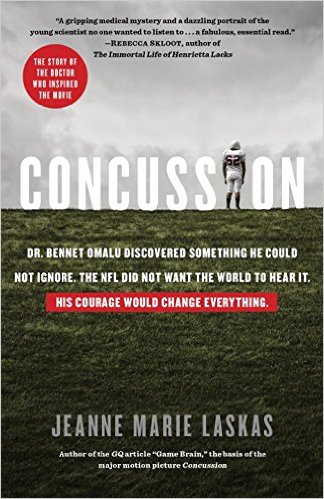 Concussion Book: A Must-Read, But Not For The Reasons You Might Think

I have to admit from the start that I am far too close to the subject of concussions and CTE to write an objective review of Jeanne Marie Laskas’s outstanding best-selling book, Concussion.

I can say, however, as someone who knows many of the book’s dramatis personae personally, who has witnessed first-hand what happens when, as Laskas writes, “professional sports, science, medicine, politics, law, families suffering, guys going crazy, beating up wives, guys killing themselves” and social media collide; who has seen what happens when those with money and power, big egos, and a talent for self-promotion honed in the professional wrestling ring, seize control of the concussion narrative from the scientists.  If you are interested in exploring the dark underbelly of that world, Concussion is a must-read.

Jeanne Marie Laskas is a brilliant writer and I found myself taking the time to actually savor the book. I did not want it to end. I was like reading a real life mystery thriller. So many of the back stories that I had been wondering about were unfolding page by page.  Some of the dots are connected, but some are not; I will be looking for a sequel to connect more.

Before you crack open the book, you need to understand one thing: it bears only a passing resemblance to the movie, and tells a very different story, one that needed to be told, but one that, even now, hasn’t been fully told.

The book is not nearly so much about Dr. Omalu’s David and Goliath battle with the National Football League over telling the truth about CTE. It is not so much about how Dr. Omalu’s American dream was, as one movie reviewer put it, “waylaid by naysayers” (a familiar story for anyone who has read League of Denial or seen the Frontline documentary, but one which is re-told within the book’s pages) – although it is certainly worth reading to hear Dr. Omalu’s insider perspective on that battle.

What the book is really about, and where it breaks new ground, in my view, is in the last 100 or so pages, which tells the story of how Dr. Omalu’s work was essentially co-opted by one man, Chris Nowinski , co-founder of the Sports Legacy Institute (rebranded as the Concussion Legacy Foundation just weeks prior to the release of this book) , a man who Laskas describes as “neither a doctor nor a scientist … [but] a guy from Boston with his own very bad headache who had become a self-appointed brain advocate.”

As someone who has spent the past 16 years in the cutthroat and competitive world of Concussion, Inc., and whose journey both intersects and parallels Dr. Omalu’s in so many respects, I know all too well why Dr. Omalu traces the beginning of his own “regrettable quagmire” in the “shady world of concussions in sports” to the day he received a phone call from Mr. Nowinski in November 2006.

For it was the subsequent January 18, 2007 front page article in the Times that not only changed Dr. Omalu’s life forever, and thrust both its author, Alan Schwarz, and Mr. Nowinski into the concussion spotlight (in which Mr. Nowinski has largely remained), but, as result of the unmatched power of the New York Times and SLI’s well-financed publicity machine, allowed them to control and shape the media narrative about concussions and CTE for better, or in many cases, in my view, for worse, for the past decade.

In the end, Concussion is an all-too-sad reminder that America is no longer a land where “people play [ ] fair. … [A] land where you d[o] honest work and work [ ] hard and harder still and because of your hard work you earn [ ] respect.” As both Dr. Omalu and I know all too well, it is instead a land filled with “jealousy, envy, rancor, [and] meanness.” The book, however, left me with a haunting, unanswered question: what would be the state of the science today if Dr. Omalu had been supported and encouraged to continue to study CTE, its causes and potential remedies, instead of being shoved off the stage.