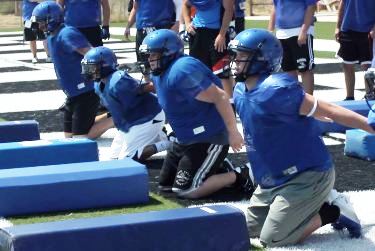 Responding to concerns about the effect of repetitive head impacts in football, forty-six of fifty state high school athletic associations will begin the 2016 season with limits on full-contact practices in high school football, with only New Hampshire, Delaware, South Dakota, and Louisiana the only four states currently without any such restrictions.

A growing body of research (1-13) suggests that repetitive, sub-concussive head impacts sustained in sports may play a more important role than concussions in putting an athlete at risk of neurocognitive dysfunction later in life.  The research has led to calls by concussion experts and safety advocates that high school and youth football organizations minimize exposure to repetitive impacts by limiting the number of hits they sustain in a sports season, over the course of a year, and during a career, and by removing helmet-to-helmet contact from the game as much as possible, such as by teaching rugby-style, or heads-up tackling, or even by conducting some practices without helmets altogether. (14)

The governing bodies at all levels of football have responded with breathtaking speed with rule changes.

In 2013, state high school athletic associations in Arizona, Washington State, Iowa, and Texas moved to impose some limits on full-contact practices, while the Pac-12 joined the Ivy League in limiting regular season practices to two per week (No other major college football conference has followed suit, at least so far, although individual football programs have adopted limits informally).

In advance of the 2014 season, a number of additional state high school athletic associations imposed contact practice limits, with Wisconsin prohibiting full contact during the first week of practice, limiting full contact to 75 minutes per week during week 2, and capping it at 60 minutes thereafter, and Michigan prohibiting high school football programs in the state, after the first regular season game, from conducting collision practices (which it defined as “live, game-speed, player versus player contact in pads involving any number of players”) on more than 2 days in any week.  Notably, the state high school athletic association’s executive director rules said that the rule was “really … where 85 to 90 percent of our coaches already were,” and enacted more to  “send a signal to that 10 to 15 percent to get on board with the rest of us to make football just as safe as it can possibly be.”

In November 2014, the National Federation of State High School Associations (NFHS) recommended to its member associations that they adopt limits on full-contact practices in high school football.

In the months leading up to the 2015 fall season, some state associations adopted the NFHS recommendations exactly, while others altered them to more closely fit the needs of their member schools, with the state associations in Iowa, Kansas, Georgia and Tennessee opting to limit full-contact practice to 90 minutes a week and other states, such as Ohio, electing to limit full-contact to 60 minutes a week. Kansas banned “live action” the day after a game (a change made to address the issue of student-athletes playing a varsity game followed by a junior varsity game the next day).

In time for the 2016 football season, more states have jumped on the contact practice limit bandwagon, bringing the number of states with such limits, according to Terry O’Neil of the advocacy group, Practice Like The Pros, to 46. Florida now limits live contact during regular season and postseason practice  (defining live contact as “drills with game-like conditions where players are taken to the ground”) to no more than three days per week, 30 minutes per day and 80 minutes per week, and bans contact on more than two consecutive days). Effective with the 2016 season, high school football players in Kansas  will not be allowed to participate in games on consecutive days (a change was made to address the issue of student-athletes playing a varsity game followed by a junior varsity game the next day).  Pennsylvania now limits contact practice to 60 minutes per week.

The question then, is do the contact practice limits work?

A 2013 study (15) by Steven Broglio and colleagues at the University of Michigan found that limiting contact practices in football to one session per week, or eliminating contact practices altogether, would lead to an 18% to 40% reduction in head impacts respectively over the course of a high school football season.

In a 2015 pilot study of college football players (14), researchers, including Broglio, also found that engaging in a 5-minute helmetless tackling drill twice a week during pre-season football and once a week during the season reduced by almost a third the frequency of impacts to the head over the course of a single season.

In 2016, Broglio reported that the 2014 rule change limiting full-contact high school football practices in Michigan to no more than two per week reduced head-impact exposure for all players by an average of 42%, with the largest reduction occurring among lineman, who also experienced a sharp decline in the number of impacts to the front of the helmet. (16)

One thing scientists don’t know with any certainty is whether widespread adoption of limits on full-contact practices in football,  intended to make the game safer, has the perverse effect of creating additional risk of injury to players because they haven’t spent enough time learning to tackle properly.

A March 2013 review of current risk-reduction strategies in the British Journal of Sports Medicine (17) was careful to remind state high school athletic associations and legislatures that, in enacting limits on full-contact practices, they “need to carefully consider potential injury ‘trade-offs’ associated with the implementation of injury-prevention strategies, because every change may have certain advantages and disadvantages. That is, by reducing one risk or danger, additional risks may be created.” In other words, as the 2013 Michigan study points out, limits on full-contact practices could create additional risk of injury to players because they haven’t spent enough time learning to tackle properly.

While it is hard, in the absence of substantial research to draw any firm conclusions, the results of at least two recent studies, however, should help to allay those fears, suggesting that reductions in full-contact practices can be accomplished safely without putting players at additional risk, while researchers continue looking for the head trauma “holy grail”: a threshold – whether it is number of hits per week, over the course of the season, of a certain force, or to a certain part of the helmet  (e.g. facemask, top of the head) above which players are at an unacceptably high risk of permanent brain injury.

In the first, a 2013 study by researchers at Wake Forest Baptist Hospital and Virginia Tech (18) showed that reducing the number of head hits in practice did not, as some had predicted (19) lead to higher force impacts during games.

More recently, a 2015 study (20) practice contact restrictions, such as implemented by Pop Warner, at least when implemented in conjunction with comprehensive coach education in teaching “heads up” tackling, was effective in reducing the rate of concussions in youth football.

Note, however, that both studies involved youth football players, who, on average, do not get hit as hard as high school, college, and pro players, and sustain, on average, far fewer impacts to the head over the course of a season to begin with (see chart below)

If the question is whether the contact practice limits work to limit concussion risk and long-term cognitive function, the answer is also that it is too early to tell, although preliminary research suggests that the answer with respect to reducing concussion risk is likely yes.  Research has yet to be conducted on the effect of contact practice limits on the long-term neurocognitive health of football players.

As Broglio said in his 2013 study,  while research suggests that contact sport athletes are likely at a greater risk for developing neurodegenerative diseases such as chronic traumatic encephalopathy and cognitive problems later in life,  we still don’t have research “indicating the relationship between head impacts, concussions, and other factors (eg. genetic profile) that may trigger the disease pathway.”

Preliminary High School RIO injury surveillance data suggests that the new rules have resulted in a statistically significant decrease in concussion rates during practices in Texas, with similar results seen in Arizona, Maryland and Alabama after comparable changes were made to practice rules in those states.

A research paper (28) presented at the American Academy of Pediatrics (AAP) National Conference & Exhibition in Washington, DC in October 2015 by researchers at the University of Wisconsin-Madison reported that the rate of sports-related concussion sustained during high school football practice was more than twice as high in the 2012 and 2013 seasons as for the 2014 season for high school football when a rule went into effect in Wisconsin prohibiting full contact during the first week of practice in high school football, limiting full contact to 75 minutes per week during week 2, and capping it at 60 minutes thereafter.

As for research on the effect of limits on full-contact practices on an athlete’s long-term cognitive function, there is none, leading  Broglio to conclude that the evidence surrounding long-term cognitive health as related to head impacts remained “inconclusive” at best.

Broglio agreed with those, including Dr. Robert Cantu, who believe that any trauma to the brain should be avoided, and that limits designed to reduce total trauma to the brain of an athlete are, by definition, a worthwhile step to take, finding such argument “logical” and “appealing.”

While the restrictions on full-contact practices in football which have been implemented cannot be seen as anything but positive, there remains what Broglio characterized as a “lack of clarity surrounding the relationship between repeated head impacts in high school athletes and long-term neurocognitive dysfunction” that only additional research can remove.

As a result, Broglio, says that “until the risk factors for … CTE … are better defined by carefully designed and controlled research,” and research determines “what the advisable limit to head impact exposure should be,” employing contact limits as a way to reduce the risk of concussion and long-term brain injury will remain, as they have from the start, “educated guesses, at best.”

Repetitive Impacts: A Major Concern At All Levels of Sports

Head Hits During Practice Can Be Safely Reduced in Youth Football, Study Suggests