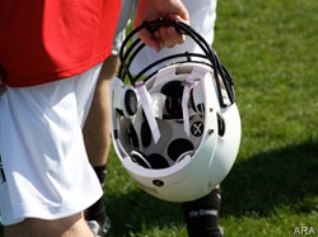 Creating A Culture Of Concussion Safety Requires Teamwork All Season Long, Not Just One Day

If your child plays a contact or collision sport, whether at the youth, middle school or high school level, chances are they will suffer a concussion at some point in their athletic career. How quickly they recover may depend on how soon after injury – if at all – their concussion is identified so they can be removed from practice or game action. The problem is that concussion signs – still the best way to identify a concussion – are difficult to spot, and athletes often hide their symptoms. The consequences of such unreported and undiagnosed concussions range from a longer recovery up to and including, in rare cases, catastrophic injury and death. One way to improve the chances that an athlete’s brain injury is identified is for teams to employ a “buddy” system in which team members are assigned to watch for signs of concussion in designated teammates and, if they spot signs, or if their teammates tell them they are experiencing symptoms, are encouraged or required to immediately report the possible injury to the athletic trainer or the coach.

While I had been advocating the use of a buddy system for many years in every sport, it was not until five years ago, during the taping of our PBS documentary, “The Smartest Team: Making Football Safer,” in Newcastle, Oklahoma that I began to truly appreciate not just how culturally entrenched was an athlete’s reluctance to self-report concussion symptoms but also the part a buddy system could play in changing that culture.

At a players-only meeting at the beginning of pre-season, and in interviewing athletes in small group and one-on-one, nearly every football player I spoke to freely admitted that they would not self-report concussion symptoms.

“If I can get up and walk away from it, yeah, I’ll probably keep playing,” one said.

“You see some dots and they go away … so you just keep playing through it. It’s my senior year,” said another.

“As long as I can still see and keep my balance, as long as I’m not feeling dizzy, head injuries are all right,” acknowledged a third.

Typical was what one player told me: “There was a time that I’ve gotten a concussion. I didn’t think much of it, you know, just a headache, move on with it, keep playing. … Got hit pretty hard, helmet to helmet, couldn’t see, saw stars everywhere, just went back on the field, started playing again. Didn’t need to tell anyone. I mean it’s not like I was laying down, couldn’t get up or anything. But I thought I was fine.”

(He wasn’t, of course, and should have told someone and removed himself, or been removed, from the game)

My anecdotal experience in Newcastle was that instituting a buddy system – not just players watching teammates but cheerleaders keeping an eye out for players showing signs of concussion – helped, although it’s hard to say how much. One of the players recounted how he had noticed a teammate who seemed really “out of it” at practice one day. When he told the coach, his teammate “got really mad.” But he said he was undeterred, because he “knew it was going to help [his teammate] in the long run.”

Another player told me that, “As far as the buddy system goes, I know that we need to keep each other’s backs, like me and Justin have each other’s backs as far as like, if I get a concussion or he had gotten a concussion, then you know, make sure he’s OK. If he’s out of it, you know, can’t answer simple questions, go alert the coaches. He got mad at me, but I learned it was the right thing to do.”

One of the players recounted how he had noticed a teammate who seemed really “out of it” at practice one day. When he told the coach, his teammate “got really mad.” But he said he was undeterred, because he “knew it was going to help [his teammate] in the long run.”

Given my experience in Newcastle, I was not surprised when, three years later, a 2015 study suggested that a buddy system, while it does not remove the need for honest self-reporting by athletes themselves or place final responsibility on teammates for each other’s health behaviors, may be an important step towards creating a culture of concussion safety on sports teams.

What I learned from working with the Newcastle team, and with youth football programs across the country over the years is that traditional concussion education in which athletes, coaches, and parents are taught the signs and symptoms of concussion, and the health risks of concussion and repetitive head trauma, isn’t working to change the concussion reporting behavior of athletes. Between 40 and 60 percent of all concussions – and a much higher percentage of so-called “bell-ringer” events – still go unreported; indeed, a recent study found that four out of 10 athletes with concussion signs or symptoms return to play that same day. It has become increasingly clear that the problem isn’t a lack of knowledge. Rather, it is the attitudes and beliefs of athletes about concussion reporting, what they think might happen to them if they report, and what they think are negative attitudes of coaches, teammates, parents, and fans about concussion reporting which combine to create a climate which discourages reporting.

In the age of social media, such negative attitudes by teammates about honest self-reporting can take the form of cyber-bullying and shaming. “As health care providers dealing with concussions, we need to be aware that many concussed patients may be bullied or shamed on social media by friends or teammates who may not believe that they are experiencing concussion symptoms, or that those symptoms are lingering,” notes Mark Halstead, M.D., a sports medicine physician and Director of the Washington University Sports Concussion Clinic & Young Athlete Center.

The answer, then, is to work to change attitudes about concussion symptom reporting so that honest reporting is viewed as a valued team behavior and a hallmark of a good teammate. Like the Centers for Disease Control and an increasing number of concussion experts, I believe that the best way to increase the rate at which athletes report concussion symptoms, either their own or their teammates, is for coaches, parents, medical staff to work as a team to change reporting behavior – to reshape the culture around concussion reporting – by changing individual and team reporting attitudes and norms and by creating a climate in which athletes feel comfortable reporting their symptoms.

Available free of charge on MomsTEAM’s new SmartTeams concussion website, the #TeamUp4ConcussionSafetyTM program, developed by MomsTEAM Institute as part of its SmartTeams Play SafeTM initiative with a Mind Matters Educational Challenge Grant from the National Collegiate Athletic Association and Department of Defense, is designed to do just that: to increase reporting by athletes of concussion symptoms by engaging coaches, athletes, parents, and health care providers in a season-long, indeed career-long program which emphasizes that immediate reporting of concussion symptoms – not just by athletes themselves but by their teammate “buddies” – not only reduces the risk the athlete will suffer a more serious brain injury – or, in rare cases, even death – but is actually helps the team’s chances of winning, not just in that game, but, by giving athletes the best chance to return as quickly as possible from concussion, the rest of the season, and by teaching that honest reporting is a valued team behavior and a hallmark of a good teammate.

The rate at which student-athletes immediately and honestly report experiencing concussion symptoms, both their own and their teammates, will only begin to increase if all stakeholders first understand how much they know about concussions, and about their own attitudes towards and beliefs about symptom reporting. Our five-part program begins by asking coaches, athletes, athletic trainers, and parents to take a series of quizzes designed to test their concussion knowledge, and, more importantly, whether they view concussion symptom reporting in a positive or negative light.

While knowledge and awareness of concussion has increased substantially over the seventeen years that MomsTEAM/SmartTeamsTMhas been engaged in concussion education, research shows that there are still important gaps that need to be filled. To fill them, coaches, parents, and athletes will be encouraged in Step Two in the #TeamUp4ConcussionSafety program to continue learning about concussions by taking our online concussion education course.

Because studies show that one-off concussion education isn’t enough to change concussion symptom reporting behavior, Step Three in the SmartTeams Play SafeTM #TeamUp4 ConcussionSafetyTM game plan calls for coaches, athletes, athletic trainers, team doctors (and, at the youth and high school level, parents) to attend a mandatoryconcussion safety meeting before every sports season to learn in detail about the importance of immediate concussion symptom reporting, not just in minimizing the risks concussions pose to an athlete’s short- and long-term health, but in increasing the chances for individual and team success. (As I have learned from long experience with youth and high school sports programs, making attendance at a concussion safety meeting voluntary virtually guarantees a lot of no-shows.)

And, finally, because prevailing attitudes towards concussion symptom reporting and reporting behavior are deeply entrenched in our sports culture, we encourage, as Step Five, that coaches, athletes, athletic trainers, team doctors, and parents continue working over the course of the sports season to create and maintain an environment in which athletes feel safe in immediately reporting concussion symptoms (both their own and their teammates) by sharing and reinforcing positive messages about the importance of immediate concussion symptom reporting via social media, by maintaining open lines of communication and an ongoing dialog about concussion safety among and between and among coaches, athletes, medical staff and parents.

Brooke de Lench is a pioneer in child athlete safeguards and rights, a risk reduction in sports and legal consultant.  She is Founding Executive Director of MomsTeam Institute, Inc., Producer/Director/Creator of the documentary, “The Smartest Team: Making High School Football Safer” (PBS). Director of Smart Teams Play Safe, Publisher of MomsTEAM.com, and author of Home Team Advantage: The Critical Role of Mothers in Youth Sports (HarperCollins), and Brooke is also a founding member of the UN International Safeguards of Children in Sports global coalition.