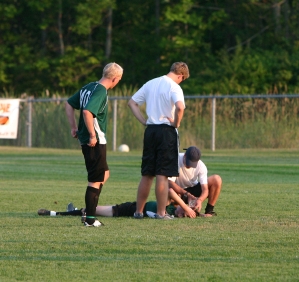 Culture of Resistance To Concussion Reporting Must Change

I have spent almost twenty years managing sport-related concussions (SRCs) in populations ranging from elementary school to university students. For the last six years, I have focused solely on young kids, seeing literally hundreds of pediatric concussions each year as a sports-medicine physician at Nationwide Children’s Hospital in Columbus, Ohio.

During these twenty years, the conversations—with athletes, coaches, parents, teachers– around SRCs have changed, often in dramatic ways, and mostly for the better. These changes reflect both the advance in understanding we have of the injury as well as the large gap that remains.

Looking back, there was a point in time roughly five or six years ago that I found that I was rarely having too many conversations where I was needing to advocate for keeping the athlete out of sport until they were fully healed. The half-time nudge from the coach (can we get him back out for the second half?) or the pushback from a parent (don’t you think she’s ready to get back on the ice?) was something I encountered less frequently. The parents and coaches and teachers were on board: make sure Jane or John is completely better before we get them back on the field.

But I am still taken aback at times. I still find, even in 2016, that I am occasionally the only advocate for the youth athlete in a situation that is crystal clear. And right now, I am writing to you parents out there, and I am writing to you as a physician, as a public-health trained advocate, and as a parent myself: sometimes, you have to take a step back and remember your child may be suffering from a traumatic brain injury. The culture of resistance still exists is our circle, the circle of parents with kids in sports. And it has to change.

A recent incident where I was covering a large soccer tournament here in Columbus illustrates the current culture and exactly what we face in trying to change it. Over one hundred elite youth travel teams from around the country and Canada had come for a weekend of games being played on dozens of fields around the city. Many of you know the scene: well over a thousand athletes and their parents, siblings and coaches, staying at La Quinta and Comfort Inns, eating at Chipotles and Olive Gardens. It’s big business. Families invest an enormous amount of time and money in attending these kind of events.

I was at our medical tent on the first day of the tournament when one of our certified athletic trainers (ATCs) was summoned to fetch an injured athlete. Coming back on the cart from a field a half-mile away, the ATC was bringing a mom and her 12-year-old son. The son had been tackled in front of the goal and went to the ground, hitting his head. He did not get up, and the referee summoned over the coach. The player did not lose consciousness, but he could not remember fully what had happened. He couldn’t remember whether had been hurt during the first or second half, and was in tears and confused as I began my evaluation at the medical tent.

I won’t go into the details of the neurological examination I conducted, but, in brief, I concluded without much difficulty that he had sustained a concussion, but had not sustained a more serious head injury (e.g. cranial fracture) or neck injury. I began to tell the mother that, though they didn’t need to go to the ER, they did need to come back later in the day for a re-assessment by our medical staff to make sure that he was neurologically stable, because if ‘things had changed’ he would need to head to a hospital. And I informed the mother that, given her son had sustained a concussion, he was done for the day, and was out for the tournament. Our Ohio concussion law, like the ones that exist in every state in the USA, makes this quite clear: his day was over, and the best he could hope for was a re-evaluation the next day by a physician to see if he was asymptomatic, so that he could begin a return-to-play protocol. Within our institution, that would mean he would be advanced to some level of physical activity short of full competition without his symptoms returning.

His tournament was over.

The mother proceeded to express her irritation with my decision. She attributed her son’s condition to his ‘poor play’ during the game, suggesting he had taken a dive and was crying more in frustration than from a head injury. She doubted my diagnosis, though she had no explanation for why her son could not explain details of his injury or the game (a loss of memory known as ‘retrograde amnesia’ and a tell-tale sign of concussion).

I proceeded to explain to the mother that her son’s diagnosis was clear. I literally quoted (as best I could from memory) the 2012 Zurich consensus statement (1):

Becauses I had to head to another field to conduct other medical evaluations, I had to end the conversation at some point.  I signed the requisite documents, informed the tournament director that the young man was ‘out,’ and I ended the conversation with the mother in this fashion: “It’s the law in the state of Ohio, ma’am. Your son is not playing any more in this tournament.”

It was not the most satisfactory way to end a conversation.

I will be the first to tell you that in my career as a physician I have been wrong at times where the patient has been right. This is not a story of my medical brilliance. This is not meant to be a story about how well I handled a situation.

This is a story of parental resistance to the effective treatment of a concussion, a traumatic brain injury.

If an athlete, regardless of age, has sustained a concussion, or there is even good reason to suspect that they have sustained a traumatic brain injury, the best approach is caution. This decision needs to be made apart from considerations of money, and time investments, and scholarships, and any other condition than patient safety.

As bad as an ACL rupture may be, we have two knees, and our knee joint does not give us our personality or intelligence. We only have one brain. It is arguably the most important argument we have. We have to treat it ‘right’.

We still have a lot to learn about SRCs, but we know without a doubt in 2016 that a concussed brain should avoid subsequent injury until it has healed.

So next time we are in the role of supporting our children in their sports, let’s work with all the members of the team on ensuring there is a sporting culture that encourages reporting of symptoms and that encourages a cautious and reasonable approach to getting back to sport. We want our kids ‘in the game.’ We want them, too, to have a healthy brain for a lifetime.